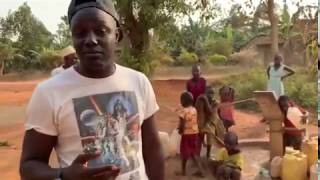 When the well is dry, we’ll know the worth of water...

That's a quote by Benjamin Franklin and it plays true to the tiny village of Kasozi in rural Uganda. This village faces a water crisis every year during the dry / sunny season and since we run some of our charity operations there, we decide to run a clean water campaign to provide the locals with a more sustainable water supply. Normally the entire village relies upon rain water being collected by big steel tanks and during the extreme dry season, there is simply no water available for the local people to use for their day to day living.

It's not just the village of Kasozi that suffers, nearly 90 percent of Uganda’s 35 million people live in small towns and rural areas, and roughly two thirds of them lack access to safe water. Poor sanitation worsens the problem. Waterborne diseases and infant mortality are widespread.

When the government of Uganda decided early last decade to decentralise rural water supplies and distribute grants to local governments to organise service, it awarded management contracts to private operators in dozens of towns. But most contracts were weak and the utilities have under-performed and this has led to 61 percent of Ugandans lacking access to safe water according to water.org.

With all that in mind we decided to direct our recent donations and sponsorship funds generated by our charity champions towards building a water well that will supply clean water for over 100 families.

The machine above will drill through dirt and rock, casing will be installed to keep the hole from collapsing. Then a concrete base will be formed around the small casing, once the concrete pad is dry, the pump mechanism will be carefully lowered into the hole and a hand pump will be attached to allow the water to flow. This water will be safe to drink which is an added bonus for the village.

Being a small charity we heavily rely on the generosity of our supporters and those brave enough to put themselves through gruelling long distance charity runs to raise money for our causes. You too can help our cause by donating using the button below.